Ultimately, topographic maps are based on the resulting curve of the intersection of a 3D figure and a z-plane. Let’s say the following cone is a mountain that is 650 m tall and defined by the given equation:

Now, it is about solving for the curve of intersection at each elevation (in this case, a series of circles) and we will look at solving for a height of 200m (z=200) below: 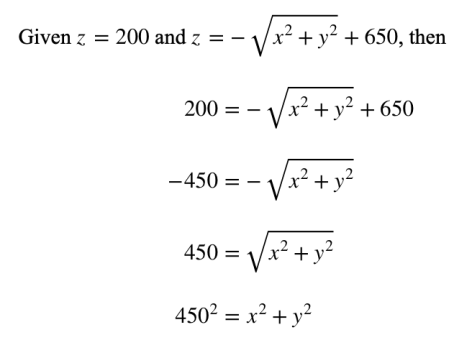 What this shows is the intersection of the cone mountain with the plane at z=200 is a circle with radius 450m. Doing this for every 100m of elevation change from 0 to 650 and projecting the circles onto the xy-plane gives us the following image:

Now, anyone approaching that mountain can get a sense of how much they will be climbing based on the path they take. Because I have chosen to use a cone, the circles are uniformly spaced, thus the slope one climbs from base to summit is linear. However, let’s look at the difference between this and a half-sphere mountain with the same height:

Using the same process to find the curves of intersection, we get the following projection:

A climber approaching this mountain will notice that their initial 300m of climbing is much steeper than their final 350m because of how close together the curves are spaced.

Although this mathematics utilizes 3D geometry, it builds upon the properties of 2D conic sections and solving equations with substitution, which students are introduced to by algebra II. Thus, this is not much of a leap, but shows that solutions to a problem can be more than just points, but entire curves.