Let’s start with three common figures in two dimensions, the circle, ellipse, and hyperbola. Each of the following shapes can be interacted with here, where you can play with sliders to find out what each parameter does. These are known as conic sections because they result from taking slices of a cone, but this is something you can research after reading this page.

Below, you will find a circle with it’s general equation, where r is the radius, and the equation specific to the graph:

Really, the only thing you can change here is the radius, thus making the circle larger or smaller.

Think of an ellipse as a squished circle. In the equation below, a and b control the squish, therefore our graph has a = 4 and b =2:

A circle is really an ellipse where a and b are equivalent. Can you figure out why this is the case?

A hyperbola is stranger than the circle or ellipse and results from a different way of slicing a cone. The parameters c and d impact the squish and spread of the two sides:

Now, we are going to look at a special case that isn’t actually a hyperbola, but two intersecting lines when we slightly change the equation:

The reason for this special case will become important as we move into the 3D shapes below so read on!

From Circle to Sphere

The jump from circle to sphere simply means bringing in a third variable, but the structure is the same: 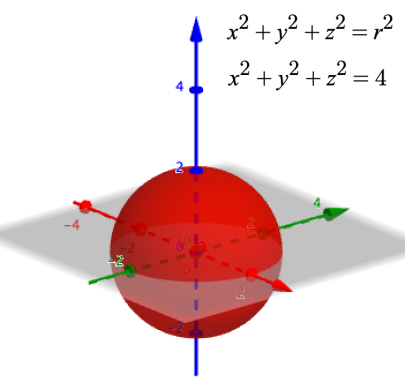 The z variable is really just informing the computer that it must also move along the vertical axis. Notice how our circle form the beginning of this page wraps around the sphere, but sits on the xy-plane:

It looks like we simply rotated the circle around the y-axis and colored in its path.

From Ellipse to Ellipsoid

Aside from being fun to say, ellipsoids follow the same principle as turning a circle into a sphere (remember a sphere is a type of ellipsoid):

Once again, its the same format, but with the added z variable to account for the vertical dimension and our original ellipse from above fits around this ellipsoid: 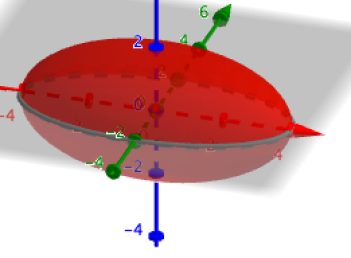 From Hyperbola to Hyperboloid

And finally, we get to our Hyperboloid and Cone: 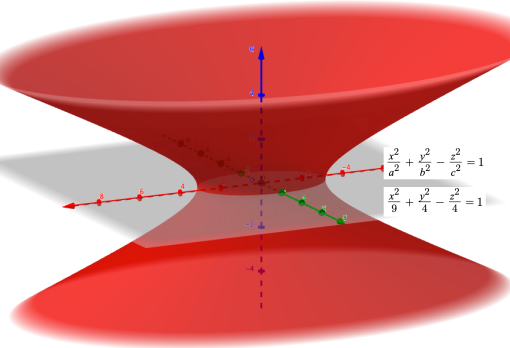 Notice that both figures follow the same pattern as the Sphere and Ellipsoid, simply bringing in a third variable. It is important to notice the curved versus linear sides of a hyperboloid and cone respectively. And there you have it folks! Now do some investigations of your own: