For most secondary math instructors, they can probably recite the rules of traditional trigonometry in their sleep. As a result, it is often easy to gloss over why these rules work despite the fact that this may be at the very edge of student understanding, thus I’m arguing there is a strong need for proof. Another reason I’m advocating for proof is that a later page will introduce us to the mind-bending rules of spherical trigonometry, which is essential for a spherical Earth. So let’s begin with defining the basics of sine, cosine, and tangent, remembering that they only apply to right triangles:

On a future page, we will talk about the applications of these rules because they are incredibly useful when dealing with bearings, distances, and locating one’s self on a map. Annoyingly for navigators though, their usefulness is limited to have a right angle as a reference. Fortunately, past mathematicians and navigators (there wasn’t always a difference) found a way to apply these rules to all triangles, calling them the law of cosines and the law of sines. They are as follows:

As teachers, it is easy to simply give these formulas to students and then teach how to use them, but this adds to the perception of math that these laws just somehow exist. People had to work hard to find and prove that they are laws at all. So let’s look at proving one case from the law of sines and one case from the law of cosines. Once these are proven, the other relationships are quite straightforward. I am not advocating that students be told to go off and find a law, but we can guide them through the process of asking questions and then follow them to their logical end.

I know sine, cosine, and tangent can be used on right triangles, but what about the triangle below?

Well, given what I know, I’m going to create a right triangle inside so I can at least start to use trig:

Because of this, I now can say the following:

And, following the rules of algebra:

Then by substitution (or the equal values method):

And, once again, as long as I divide both sides by the same thing, I maintain equality:

And there you have it, a portion of the law of sines! But what about the law of cosines? Well, that requires our more complicated picture from earlier: 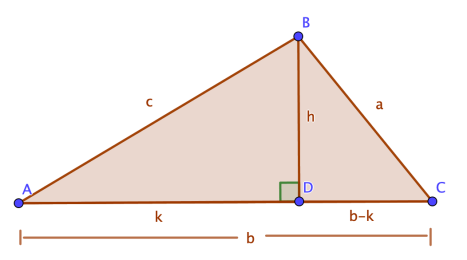 This will also require the Pythagorean Theorem from an earlier page and one additional property derived from the PT:

Using a similar strategy from the law of sines, we have:

And by substitution, multiplication, and factoring:

And there you have it, a law of cosines!

Now we can go take a look at applications in locating one’s position using bearings, coordinates, etc. Head to one of the following pages to take a look at possible research options for students: